Treaty Politics and the Rise of Executive Agreements: International Commitments in a System of Shared Powers

In foreign relations, U.S. presidents have exercised a growing independence through the use of executive agreements. The U.S. Constitution specifies that two-thirds of the Senate must ratify a proposed treaty but makes no provision for other forms of international agreements. In 1942 the Supreme Court affirmed the legality of executive agreements, and since World War II, they have outnumbered treaties by more than ten to one. Are presidents trampling the Constitution or seeking to streamline the diplomatic process?

Glen S. Krutz and Jeffrey S. Peake argue that the preference for executive agreements is the result of a symbiotic evolution of the executive and the legislative branches and that in order for the United States to survive in a complex, ever-changing global environment and maintain its world power status, it must fulfill international commitments swiftly and confidently. Members of Congress concur that executive agreements allow each branch to function more effectively. At the same time, the House continues to oversee particular policy areas, and presidents still submit the majority of the most significant international commitments to the Senate as treaties.

Krutz and Peake conclude that executive agreements represent a mutual adaptation of the executive and the legislature in a system of shared power.

Glen S. Krutz is Professor of Political Science at the University of Oklahoma. 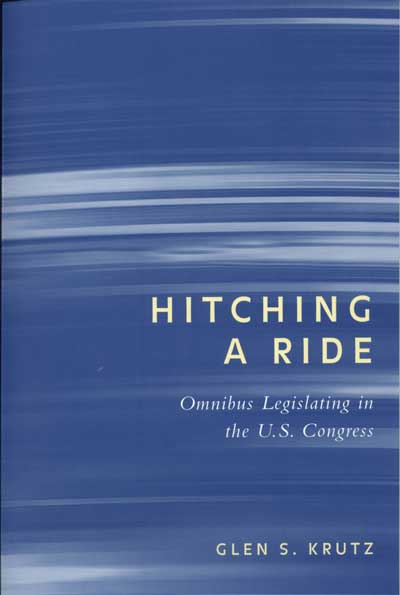 OMNIBUS LEGISLATING IN THE U.S. CONGRESS

“Hitching a Ride is an original and provocative book that will be of interest to the entire community of legislative scholars. The strengths of the book are the topic, the theoretical perspective, the broad range of types of evidence, the historical coverage, and the substantive importance of the question. All future work on legislative productivity will have to refer to this book.” —Frank R. Baumgartner, Pennsylvania State University

“Hitching a Ride describes the purpose, prevalence, and impact of omnibus legislation at the federal level. It is the first treatment of this important facet of the policymaking process and should attract considerable attention among scholars of American politics. It will be a must read for students of executive-legislative relations and the congressional policy process.” —E. Scott Adler, University of Colorado

Omnibus legislating is the controversial practice of combining disparate measures in one massive bill. Omnibus packages are “must-pass” bills because they have a nucleus that enjoys widespread support but they also contain a variety of often unrelated measures that are simply “hitching a ride.” Why are omnibus bills employed? Why the increase in their use? Why do leaders attach certain bills to omnibus packages and not others? Glen Krutz addresses these and other questions in this original and insightful study of an important change in the legislative process.

Many view omnibus packages as political vehicles and therefore attribute their rise to politics, but Krutz finds that, whatever their political value, omnibus packages are institutionally efficient. Omnibus legislating improves congressional capability by providing a tool for circumventing the gridlock of committee turf wars and presidential veto threats.

In addition to furnishing a fascinating look at lawmaking, Hitching a Ride: Omnibus Legislating in the U.S. Congress provides a challenge to recent studies of congressional change that focus on political factors. Political and institutional factors together, Krutz argues, explain congressional evolution.

Co-Editor for Special Issue of Journal

This was an entire issue of a journal (about the length of a short book) that Dr. Eller and I edited and produced based off papers written and presented at the 2008 Policy Shootout held at the University of Oklahoma.  Each paper (article) included a senior policy scholar together with a junior scholar. Senior contributers were a “who’s who” among policy scholars, including Peter DeLeon, Alisa Hicklin Fryar, Hank Jenkins-Smith, Tom James, Bryan Jones, Larry Lynn, Ken Meier, Paul Sabatier, Anne Schneider, and Dave Weimer.

Explaining institutional change : the rise and impact of omnibus legislating /

Winner of the American Political Science Association’s E.E. Schattschneider Award: For the best doctoral dissertation completed and accepted in 1998 or 1999 in the field of American government and politics.

Committee Citation: In this extremely creative and insightful dissertation, Glen Krutz argues that the increased use of omnibus legislation is an effective mechanism used by both President and Congress to achieve policy goals in an environment of growing issue complexity. Although omnibus legislation has been used since the 81t Congress in 1949-50, it has become more and more common in national legislation. It now comprises almost twenty percent of all bills enacted. Building upon important work in Congressional decision making, divided government, and budgetary politics, Krutz’s sophisticated integration of theoretical literatures and his empirical examination of over 1,000 major bills from 1949-94 reveals that “omnibus legislation is a way to manage uncertainty in legislative institutions in order to get things done, and that leaders, members, and the president all gain something in striking omnibus bargains.” The analytical design that engages both micro-factors of strategic bargaining and macro-factors such as institutional constraints allows Krutz to make a major contribution to our understanding of how American government continues to evolve in ways that result in legislative productivity. As Krutz so eloquently states, “[Omnibus bills] provide a way to circumvent the pressures of deficit politics and issue complexity, the gridlock of divided government, and the gridlock of committee jurisdiction fragmentation. In this regard, omnibus bills tell a collective story of successful strategic-level and institutional adaptation to challenging circumstances.” Dr. Krutz has made a major contribution to our understanding of American national institutions that will be cited favorably for many years to come.